“When an Agama lizard sees you coming, it jumps onto a wall. It doesn’t fall because it has ‘special’ powers. Those powers are the same that we masons use. Those are secret.”

The master mason makes his way through the maze of twisting alleyways, staircases, rising spires, and banco houses that not only typify Djenné, but designate it as a World Heritage Site.

As he walks, the Great Mosque rises above the urban sprawl. A member of Djenné’s reputed masons’ guild (barey ton), he has seen to its traditional replastering, year after year. Le Crépissage involves the town’s eleven neighborhoods in a proud and exuberant ritual. Residents, whether masons or not, coat the walls with plaster, racing each other up the permanent palm-trunk scaffolding that bristles from the facade towards the mosque’s rounded minarets.

“Just like in life, everyone wants to end up on top.“

Master of Water and Earth

He walks onward. Tracing out his route, this master mason also retraces his genealogical origins – back to the legendary Bozo, masters of water and of the natural forces that animate the sands, clays, and husks needed in the creation of this rich mud-brick architecture. Armed with his trowel, crowbar, and korbo, the secret powers contained within his talismans and blessed mason’s ring, he arrives at last. The new construction site is brimming with activity. The initiate apprentices (traditionally Bozo, yet more recently Marka, Bambara, and some from the Hourso caste) and temporary laborers, most often Dogon, await his incantations and the ritual scattering of millet seed, feathers and charcoal that will forever protect the foundation.

At the site, materials are transported, bricks are carefully laid, and surfaces are artfully refined in precise sweeping gestures.

The hierarchy between this master mason and his crew is well-defined, yet light-hearted competition, displays of bravado, and even traditional inter-ethnic bantering, especially between the historically linked Bozo and Dogon, serve to individuate, all the while simultaneously uniting, the extraordinary masons of Djenné.**

The story of Djenné is typically told through its architecture. In this 4 part series created by the Smithsonian, the masons of Djenné speak, in their own words, about the history of their city, its founding myth, and about their role in protecting its architectural legacy. 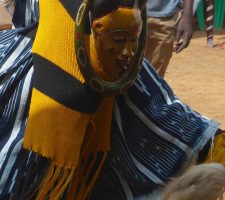