“A majestic tree with a massive trunk, the baobab reigns in nature’s midst like a lion among animals. Its huge, tortured, root-like branches give credence to the belief that, thanks to them, it derives its strength from sky.”

The Baobab, as Muse﻿

This icon of the West African savanna ― noble, venerable, seemingly eternal ― has taken root, well beyond its semi-arid grasslands, in the rich and fertile literary landscape. From its first recognizable appearance in the early travel writings of Ibn Battuta (1352) to its emergence in both penned illustration and prose on Antoine de Saint-Exupéry’s imaginary planet Asteroid B-612, the mighty baobab has inspired much ink to flow. It has graced the covers of works from Dramine Traore’s Sighs of the Baobab to Daouda Ndiaye’s poems in Wolof: The Baobab’s Shadow.

In Zin-Damba Naab (The Genius of the Baobab), Jean-Noël Sibiri Ouédraogo transcribes, in his native Mòoré, the oral Burkinabe folktale of the talking baobab, while its loquacious Senegalese counterpart, the allegorical Koundjere Koudoume (The Magic Baobab), is taken on by storyteller Penda Soumare.

The muse of both distant poets and local village sages gathered in its shadow, the protagonist of lore and legend, the hallowed stomping ground of spirits and mystics, the baobab is, in a Shakespearian sense, “such stuff as dreams are made on”; rising above the terrestrial horizon to become the conceptual  “stuff” of maxim, metaphor, and myth throughout the whole of West Africa.

(Wisdom is like a baobab tree; no one individual can embrace it.)

A multitude of gods from various West African cultures vie for attribution in the skyward catapulting of the original baobab and for its eventual “upside-down” landing. But the specific Serer creator god, Roog (or Koox in Cangin), can unabashedly take credit, at least in Senegal, for its genesis from the primordial swamp of silence and darkness. Like most revered trees in Serer mythology, the baobab (mbudaay-baak) is rarely cut and in that singular moment, incantations (jat, muslaay, leemaay), directed at the harm-bestowing axe, beg forgiveness.  Likewise the Dogon, along the Cliffs of Bandiagara in Mali ― who, incidentally, use ropes made of baobab bark to climb them ― can neither cut, buy or sell this “Tree of Life”.

So symbolic with life, force, and wisdom is the baobab, that when Sundiata, according to griots, uproots and carries an entire baobab, the “Lion of the Mali Empire” awakens. And it is telling that griots, themselves – the traditional guardians of ancestral knowledge – are sometimes buried in its sacred hollow.

“Griots are the repository of knowledge. If they were buried underground, it would as though we were burying our history and we can’t do that because knowledge enlightens […]. It is essential to choose a baobab tree that isn’t inhabited by spirits.”

Within a baobab’s hollow, water can be preserved, prisoners kept (Nigeria), or a weaver‘s loom sheltered from the unforgiving West African sun (Mali, 14th century reference by Ibn Battuta). And within its seeds lies the “stuff” of muses yet to come.

“Knowledge is a light that is in man; it is the inheritance of all that the ancestors knew and sowed deep within us, just as the power of the baobab is contained in its seed.” 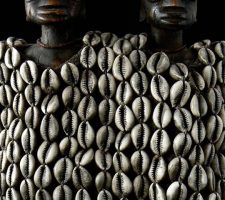