Somewhere in the Futa Tooro region of Senegal, a Tukolor weaver, or mabube, reenacts an ancient ritual. He gathers his loom parts — pulley, wheel, shuttle, beater that have been carved for him and him alone — bringing them back, each and every day, to a framework that does not uniquely belong to him. Although he has constructed and personalized this loom himself — lashed, slotted, and bound the roughly-hewn wooden posts and cross-members that typify most West African looms — this Tukolor weaver understands that his customized loom is nevertheless shared, repossessed each night by jinneeje or seydaneeje, spirits at the very mythological origins of his craft.

Each and every morning brings him to the near set of loom posts, naatirde or entrance, mirroring the threshold crossed, once upon a time, by ancestor Juntel Jabali when procuring the bewitched bush loom for humankind.  With incantations spoken and spells cast, the nocturnal spirits take flight, in perpetuum since the lore’s inception, through the far set of loom posts, the symbolic exit or jaltirde.  The daylight shift now belongs to the weaver, protected and nurtured in his craft by millet seeds preemptively planted at the loom’s base.

Closely-related to this Tukolor weaver is his more southern Serer counterpart, bound not only by a traditional joking relationship, but also by this common weaving origin lore, or gandal mabube.  The spirit of the ancestors works in each of these weavers, directing them, inspiring them, technically instructing them through dreams. Dreams or dream-like states can also give our weavers access to the mystical world of magical formulae, verses and incantations, cefi, that conserve and cultivate their craft.

Procuring weaving knowledge, at all costs, may even require stealth or trickery.  And wherever guile and acuity are at play, it is sure that Anansi, the spinner of Akan weaving lore (Ghana, Ivory Coast), is never far away.

The Rhythm of the Loom

The spiritual qualities of the loom, itself the very essence of powerful weaving mythology, prevent any major structural changes. And so, the traditional rattling of the narrow-strip treadle loom, still resounds across almost all of West Africa.

So prosodic and language-like is the rhythm of the loom, that for the Dogon in the central plateau region of Mali, weaving is the veritable “grinding of speech”; the clattering shuttle, beater, and pully, the gnashing of their verb-giving ancestor’s pointed teeth … the resulting band of fabric, a gift of warp and weft with potent words and daylight woven into the interstices. To weave after sunset would, perilously, compose but a band of silence and shade. The shared etymology of our own words, “text” and “textile”, is given rich, new metaphorical light.

Although very few textiles from the looms of early weavers have survived the harsh, arid conditions of West Africa, cloth fragments from 11th century “grinders of speech”, ancient pre-Dogon weavers, were found in burial caves in the remote Tellem cliffs in Bandiagara.  Even earlier are Igbo Ukwu remnants, dating back to the 9th century and fibers from Kissi, Burkina Faso, pre-8th century.

Yet the ancient threads of time are woven into the very cultural fabric of contemporary West Africa — from enduring Bambara Bògòlanfini (mudcloth) to Ashanti Kente cloth — by a weaver who approaches, with reverence, his loom each morning … 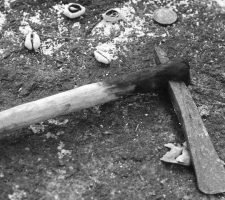