The wise words of Dogon elders emanate from the low-rising toguna (palaver hut), an architectural structure that itself, ‘speaks’. Its thick roof of millet stalks speaks to the unrelenting Malian sun, its eight sculptural support pillars to the resourceful use of durable, naturally-forked acacia wood ― scarce along the isolated sandstone cliffs of the Bandiagara Escarpement ― and to the eight primordial ancestors that they represent.

West African architecture as a whole, “born in situ and fashioned by local constraints”​3​, is a contextual expression, a practical and aesthetic response to the surrounding environment, to available raw materials, to a culture’s perception of space, of time, and of its place in the universe. In an architecture composed primarily of vegetal or earthen materials, West African vernacular forms are as diversified as its people and the landscapes that they inhabit.

The traditional raised, louvered, rectangular architecture of the Fanti, Ewe, Mende, Adja, Fon, and Wolof is an echo of, and answer to, the surrounding longilinear, easily available and alignable bamboo and palm of the coastal humid rain forests.  More insulating curvilinear, trodden earth is the Malinké, Gurunsi, Mossi, Dagomba, Somba, and Hausa’s expressive response to the demands of the harsh, dusty, arid inland savannah.​4​ And that expression becomes beautifully articulate, eloquent, and expansive, when architectural elements ― from pigmented walls to sculpted door frames and locks ― respond to culture.

“Traditional buildings, tell stories through pattern, color and ornamentation, either with free-standing sculptures or as reliefs embedded into walls, door panels, and other architectural elements. In traditional Yoruba architecture, for example, the figurative house posts used to support the roof are like totem poles, with one sculptural element stacked atop another, representing a pantheon of deities or even a roll call of battles and tribal conquests.”

Pairs of carved wooden pillars, obaschi, linked to each other, narrate the primordial union marking the beginning of the world for the Cross River people of Nigeria.​4​ The low relief hand-painted symbols that cover the Kassena’s windowless sukhala communicate the spiritual, social and historic identity of a whole culture.

The characteristic earth-encased ribs of the celebrated and imposing Hausa vault are a reflection of the bent branches, overlaid with textiles and leather, of mobile Songhai, Fulani, and Tuareg architecture.

And throughout West Africa, patterns mirror patterns in yet another striking way.  Incrementally zooming in from the design of elaborate ancient cities, to villages, to compounds, to houses, and further in, to the geometric motifs of their walls, recurrent shapes, at ever-diminishing scales ― rectangles within rectangles or rings of rings within rings ― emerge. And this fractal aesthetic is not limited to West African architecture; recursive patterns are mirrored in everything from textile, sculptural, even cornrow designs.​2​

Whether it is the anthropomorphic symbolism of Dogon houses with rectangles within rectangles portraying arms or mouths, Tallensi granaries with internal walls that radiate, like the spokes of a wheel, from a spiritual center, or whether it be the engaged pillars, ancestral symbols of continuity, that protrude from sacred structures like the Sudano-Sahelian Great Mosque of Djenné4, the architectural forms, shapes, and textures of West Africa inspire.

West African architecture, along with the masons behind it, were the inspiration for the first articles of an ongoing series: 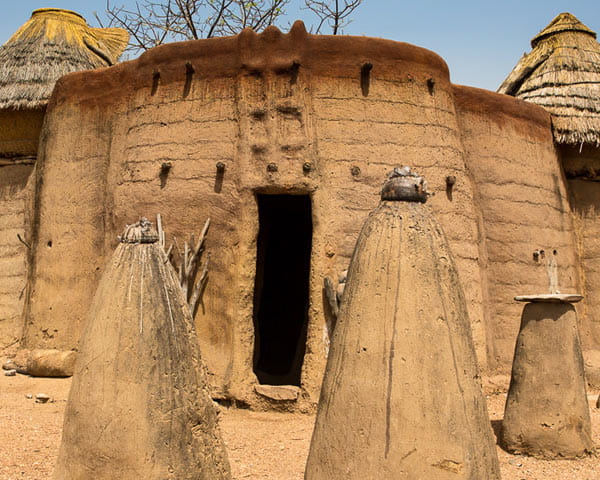 The Masons of Djenné